The 2018 NEFHL Hall of Fame Class was a strong one, with Martin St. Louis and Teemu Selanne snowing the competition in the player category, and Rob Ratliff and Phil Lanthier showing Drew Phillips the true meaning of leadership in the builder category. As we entered the 2019 induction period, questions abounded. Would any of the survivors from the 2018 vote be inducted in 2019? Would this be the year a defenseman earned recognition? Would Drew Phillips finally shape his own origin story?

In the end, the voting once again proved that the system setup by the NEFHL Hall of Fame Committee was designed to ensure only the strongest candidates would be enshrined in the hall. Former Los Angeles Kings General Manager Drew Phillips again failed to fulfill his destiny, receiving just one more vote than he had in 2018, falling well short of the necessary threshold for induction. None of the vaunted Big Three Defensemen received the necessary votes for induction, with only Pronger picking up two additional votes over last season, while both Lidstrom and Neidermayer slid in the final tally.

One question was answered in the affirmative, though, with Dany Heatley picking up four votes over his 2018 total to earn induction into the NEFHL Hall of Fame, justifying the millions of dollars spent on his induction campaign, largely bankrolled by anonymous liberal West Coast elites.  Amazingly, in this salary cap era, Heatley spent his entire career with just one team; the Florida Panthers. Heatley appeared in two All Star games, and won both the Art Ross Trophy and Hart Trophy during his team’s 2008 run to secure the Stanley Cup. While he failed to reach the point per game regular season mark for his career, his 1.16 points per game in the playoffs ranks fourth all time among players with 25 or more playoff appearances, and his 55 playoff goals are tied with Martin St. Louis for best of all time.

On the opposite end of the inductee spectrum sits Pavel Datsyuk. Daystuk appeared in games for nine teams over his eleven year career. He hit the ice for three teams during the 2007 season, and appeared with multiple teams in five different seasons. Heatly retired in 2016, after winning the Stanley Cup with the Tampa Bay Lightning, with whom he appeared in just 23 regular season games. The four-time All Star also added a Lady Byng Trophy to his hardware case in 2009, and two Frank J. Selke Trophies in back-to-back season in 2010 and 2011. His 502 regular season assists rank sixteenth all time, while his playoff plus-minus rating of +56 ranks first overall, a full twelve points ahead of the next closest skater.

An additional 20 players received the two votes necessary to remain on the ballot for next season, just three of whom were from the group of players becoming eligible in 2019. Three players (Sami Salo, Marty Turco and Nikolai Zherdev) who had previously received enough votes to remain on the ballot received no votes in 2019 and will be removed from future ballots. Voting was strong in 2019, but two teams failed to submit ballots in a timely fashion; the Dallas Stars and Tampa Bay Lightning. 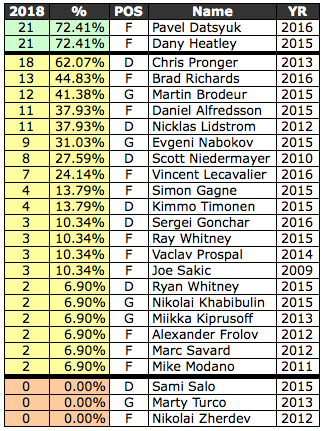 Once again, the NEFHL Hall of Fame Committee would like to thank all of the general managers who took the time to vote, and we hope to see you at the hall!