Compared to earlier Hall of Fame classes, which included the likes of Martin St. Louis, Phil Lanthier, and Dany Heatley, it was widely held that the Class of 2020 was a weak one. Even among those players from previous ballots who had polled well, only Chris Pronger had managed to accumulate more than 15 tallies, receiving 16 in his initial year and 18 in his second year. The question put before general managers this year was a simple one; were any of these players worthy of the NEFHL Hall of Fame? The answer was a resounding raspberry.

No player received enough votes to be enshrined in The Hall. Only two players from the current class, Dan “WTF” Boyle and Martin Havlat, received the two votes necessary (exactly) to remain on the ballot. In a year when it was expected that several veterans of the league’s early days would see their numbers rise, only Brad Richards (+2) and Martin Brodeur (+4) saw any significant increase in support. In fact, twelve players would see their support drop below the minimum threshold, resulting in their names being removed from future ballots. The most notable of those players include Ray Whitney, Simon Gagne, Vaclav Prospal, Mike Modano, and Sergei Gonchar.

Scott Niedermayer was the biggest loser among players, seeing his stock fall four votes from last year, to four votes total, down from fourteen votes on the 2018 ballot. The biggest loser overall, though, was former general manager Drew Phillips who saw his support continue to erode, plummeting from twelve to six, year over year. This could be due to the plethora of newer general managers who did not have the pleasure of working alongside Mr. Phillips, though many veteran managers suspect that could work to his advantage. The most likely cause for the steep decline is the #assclown social media plot undertaken surreptitiously by Scandinavian bots. 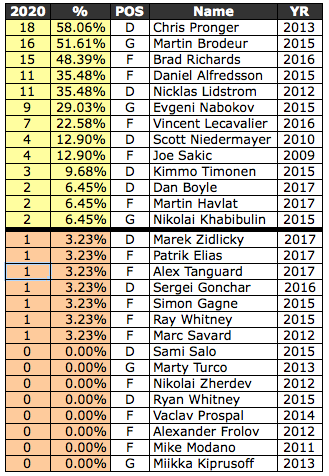 The Hall of Fame Committee would like to thank Commissioner Barry for releasing the cryptocurrency necessary to provide a virtual home for the NEFHL Hall of Fame, which can be found at its new, permanent location here:

Additionally, all inductees have been provided with a nifty virtual award to adorn their player card.

Thanks to everyone for taking the time to vote. Without you, none of this would be possible and your efforts are greatly appreciated. We hope to see you at the hall!