Iggy and the Stooges

When the list of 2020 Hall of Fame nominees was presented to the Hall of Fame Committee, it was clear to most observers that there we no Hall-worthy candidates among them. The prognostication held. In fact, more names were flushed from the ballot than received the votes necessary to live to fight another day. Only two players, Chris Pronger and Martin Brodeur, received fifty percent of votes cast, let alone the seventy percent necessary for enshrinement.

For that reason, the 2021 ballot was met with a mix of excitement and skepticism. For the first time, players with more than 1,000 games played had entered into the equation. The first goalie made the ballot since the class of 2018. Players like Brodeur and Richards had picked up support season-over-season; could this be their year?

Through all the noise, one name stood out. One name appeared on ballot after ballot. That name was Jarome "Iggy" Iginla.

While Iginla's hardware cabinet was remarkably bare, the numbers did not lie. The five-time All Star was drafted sixth overall by the New Jersey Devils in the NEFHL Dispersal Draft. During his years in the league he would head to the playoffs eleven times, including ten consecutive seasons between 2009 and 2018. While a part of the Buffalo Sabres organization in 2013, he would reach the pinnacle of his career, playing in the Stanley Cup Finals and leading all players with 16 goals and 36 points in the playoffs. Unfortunately, no Cup was to be had.

Iginla did it all except collect hardware, which is most likely why he found himself absent from two of the twenty-seven ballots cast.

Fifteen additional players would collect enough votes to remain on the ballot another year. Of those players, Brad Richards was the most popular this year, collecting one more vote than last year. Joe Sakic and Scott Neidermayer would see a noticeable increase in support, each raising their vote count from four last year to nine in 2021. Chris Pronger's support would crater, as the veteran blueliner picked up five fewer votes than his total last year. Martin Havlat would fail to secure any votes, dropping from the ballot entirely; Dan Boyle would live to fight another day. 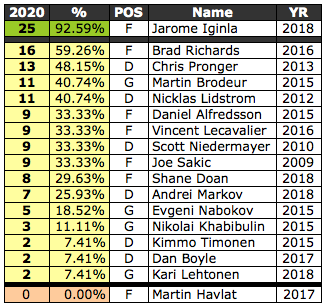 In the Builder category, Drew Phillips would see his eroded support hold steady, collecting six votes again in 2021, down precipitously from a high of twelve votes in 2019.

The Hall of Fame Committee would like to once again thank all voters, even those who were a bit late. The votes appeared more thoughtful this year than any previous year. To the four voters who couldn't make the time... we know where you live... probably Canada...