Canada was a tale of two countries on Wednesday. In the morning, flags across the provinces were lowered to half staff when news went viral about GM Kevin possibly throwing himself in front of a bus after losing to a horrible San Jose Sharks team on Tuesday night that hadonly won a single game in six prior outings.

Early Wednesday, the initial reports were understandibly confusing (oxymoron) when the victim was found crushed by the bus while dressed in a skirt and sneakers.  However, the coroner confirmed by mid-morning that the dead person was actually a cross-dressing NEFHL General Manager. Amazingly, the Buffalo Sabres GM had transformed himself from a gigantic male into a sexy-looking (albeit dead) faux female. 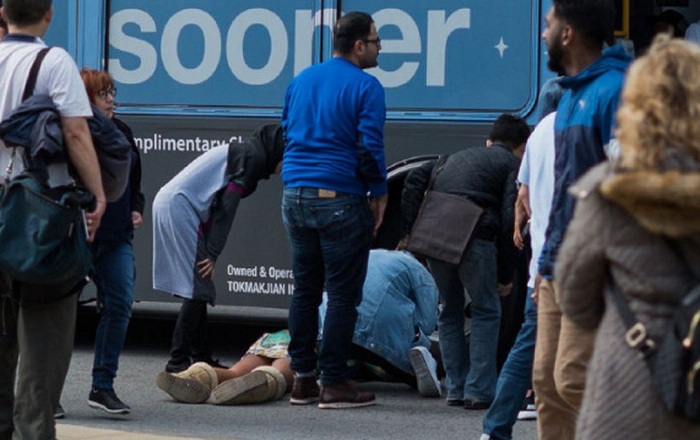 A note was discovered on the corpse’s refrigerator “I can’t live with the ignominious shame of a defeat at the hands of a horrible San Jose squad. I have done my best to keep my secret but this was something that was unthinkable…. Unfathomable… Impossible…. And so, I have decided to take a bus into oblivion.”

And then, just as the sad news began to sink in, a historic event overtook the apparent suicide. At midday, ecstatic jubilation erupted across the provinces when marijuana was legalized for recreational use. Impossibly, at the morgue, GM Kevin was resurrected and sat up… “You mean I can cook with weed?” he screamed at the pristine metallic surroundings. 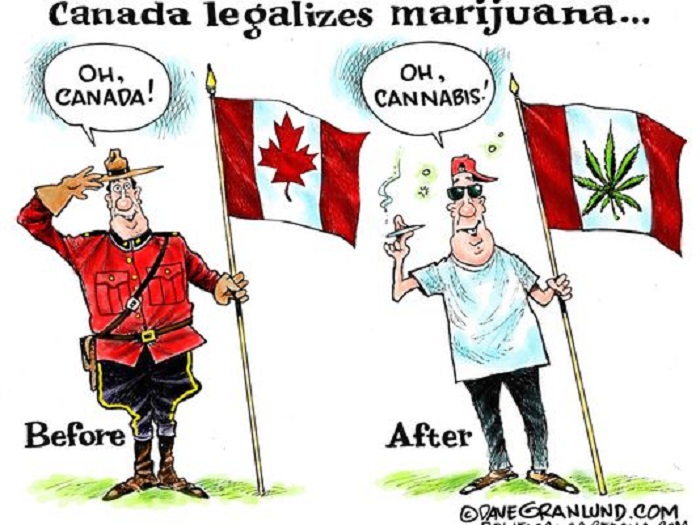 Jumping off the autopsy table, the Buffalo GM threw on his skirt and chemise, and fled the hospital, vowing to return to masculinity and his cannabis-worshipping self.

Elsewhere, American smugglers rejoiced at the opportunity to float boatloads of marijuana across the Great Lakes and hike overland into the northern states. Within an hour, drones were reportedly dropping bales of pot into the suburbs of Buffalo and Rochester. Oilers GM Jason was seen in a makeshift boat, hauling in a bale of pot on Lake Michigan.

“Life will never be the same.” GM Jason said, “I am sending trade offers to all Canadian GMs right after Happy Hour” And then “Pretty soon they won’t care about winning… They’ll be electing Donald Trudeau!”

Detroit GM Jean, unfortunately, deep in the league basement, could not be reached for coherent comment. The sweet aroma, however, was clearly wafting from his hideaway.

Pittsburgh GM Brent, upon hearing the news, was seen digging up a huge stash bag that he had buried upon obtaining his teacher’s license. He denied reports that he’d be teaching students how to roll pencil joints next semester.

Colorado GM Alex said “Legal or not, I’ll never alter my reality. When your last name is ‘church’, you don’t take unnecessary chances.”

Florida Panthers GM Trev was seen taking selfies with an array of hookahs after taking the afternoon off from work.

Habs GM Mike denied reports that Mary Kay was going to change its name in Canadfa to Mary Jay.

Flyers GM Jamie was circumspect in his reaction, saying “Now that pot is legal, I may have to redo the rankings. Obviously some of my predictions are going to go up in smoke.”

Flames GM JD just threw up his hands, “How could things get worse?” and then “I think I’m being sent to Colombia next month. The SIM will run whenever it runs.”

Kings GM Carter, maintained total silence for the first time since 1995, just managing a wink when he was passing through customs

Coyotes GM Mark, immediately posted on the Questions Forum “Can violators be reinstated?”

Leafs GM Shane was more verbal, quoted as saying “The shit I’ve been buying sucked!! Maybe now I’ll be able to get good stuff! I can’t believe it took this long to do something this right!”

The Rangers GM (whatever his name is), wasn’t quoted because he is still maintaining strict radio silence.

Capitals GM Mike was seen writing an essay on “How I spent my summer vacation” but otherwise was unaffected by the news. His only comment was “Kevin survived?”

Devils GM Alex was seen shaking his head… “I waited ten years to put this team together and now they go and legalize marijuana? Can I catch a break EVER?”

Boston GM Jason was seen toking deeply, and then, upon exhaling, said “You mean I’m NOT the Oilers GM?”

Lightning GM Paul slept through the entire day. Upon awakening to the news, he exclaimed “There is NO WAY I’m letting Forsberg or Quick out of my sight!”

Repeat cup winner Senators GM Mike was notably saddened by the news.  "Now that these guys can get high, I'll never win again!"

Blues GM Graham pleaded guilty when asked if he had sent some weed to the Columbus front office recently.

Undefeated Blackhawks GM Anthony said “I just bought some yesterday. I can’t believe I spent that much money on the shit.”

Ducks GM Ryan said “When I grow up, I want to try that stuff.”

Canucks GM Kyle immediately put up a trade block, offering a kilo of marijuana for 3 first round picks.

Predators GM Sylvain was unreachable but was reportedly running simulations on a half dozen varieties of marijuana.

Winnipeg GM Jared said “Marc left me a stash that will last until this stuff is illegal again. I’m okay either way.”

Vegas GM Derek was seen leaving Caesar’s Palace with a satchel filled with something that was now legal. “What am I going to do with all this stuff now?”

And finally, Islanders GM Steve was released from prison after serving 7 days of a twenty year sentence. “Hey, I was ahead of my time when I sold all that stuff across the border. Huh? O Canada!! I always loved you!”